A temporary shelter (red tent) has been set up at the Pike River mine for rescue staff, and a helicopter is parked in front of the mine office. Photo / Stewart Nimmo 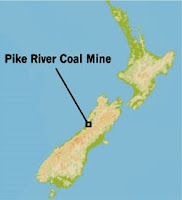 The families of up to 30 miners and contractors working at the Pike River coal mine on New Zealand's West Coast last night [19Nov.] were facing an agonising wait until a rescue effort could be launched.

Rescue efforts were hampered by worries that in the wake of the explosion at the mine, ventilation in the mine shaft was not functioning due to loss of power, potentially leading to the build-up of dangerous gases.

The cause of the explosion at the mine is still to be determined, but mining safety expert Dave Feickhert has already fingered a build up of methane gas and or coal dust as a possible culprit. Mining companies around the world face a constant struggle to avoid dangerous accumulations of methane gas and coal dust as they go about extracting coal underground.

Volatile methane
Methane goes hand in hand with coal as the two are formed together, the methane trapped in coal seams or the surrounding rock strata. How much methane exists depends to some extent on the geological pressures, but as mining activity takes place, the pressure is reduced and methane gas can be released, as this explanation of methane in the mining context shows:

"In underground mining, methane is released into the mine workings during mining. Mining regulations require methane to be diluted in the ventilation air, and then vented to the atmosphere. Mines can also remove methane before and during mining by using degasification systems. The gas can be vented, flared (not currently done in the U.S.), or recovered for its energy content. Emissions are reduced if recovered gas is flared or used. Up to 50 to 60 percent of methane can typically be recovered with degasification; the remainder is released in the ventilation air."

How dangerous is methane? Well, that depends on what concentration it is present in. The US Occupational Safety and Health Administration explains further:

[Methane is] an odourless substance that is nontoxic and is harmless at some concentrations. Methane, however, can displace all or part of the atmosphere in a confined space(1); and the hazards presented by such displacement can vary greatly, depending on the degree of displacement. With only 10 percent displacement, methane produces an atmosphere which, while adequate for respiration, can explode violently.

A lot of science and research has gone into estimating how much methane is likely to exist in different kinds of mines, coming up with ways of extracting it and evolving technology to detect dangerous levels of methane in mine shafts.

Ventilation shafts are common features of underground mines and Pike River was employing ventilation as a safety measure at its mine. However, it is a tricky business estimating and managing methane levels in mine shafts, as faults in rock can become conduits for methane from other geographically removed sources. This paper outlines the potential for "unforeseen mine gas emissions in quantities sufficient to create hazardous conditions".

Coal dust and the "explosion pentagon"

The other potentially explosive hazard in coal mines is a build up of coal dust. This hazard is as old as mining itself and has been responsible for countless deaths since the 19th century. Working at coal seams with industrial equipment throws up a large amount of dust, which if not properly extracted or appropriately dispersed can explode. OSHA again explains:

In addition to the familiar fire triangle of oxygen, heat, and fuel (the dust), dispersion of dust particles in sufficient quantity and concentration can cause rapid combustion known as a deflagration.

If the event is confined by an enclosure such as a building, room, vessel, or process equipment, the resulting pressure rise may cause an explosion. These five factors (oxygen, heat, fuel, dispersion, and confinement) are known as the "Dust Explosion Pentagon". If one element of the pentagon is missing, an explosion cannot occur.