A Clearer Picture of How Rivers and Deltas Develop 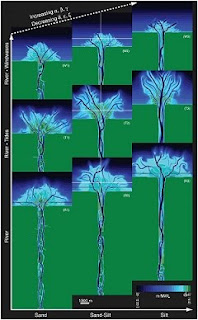 Click here to enlarge
By adding information about the subsoil to an existing sedimentation and erosion models, researchers at Delft University of Technology (TU Delft, The Netherlands) have obtained a clear picture of how rivers and deltas develop over time. A better understanding of the interaction between the subsoil and flow process in a river-delta system can play a key role in civil engineering (delta management), but also in geology (especially in the work of reservoir geologists).
Model
Many factors are involved in how a river behaves and the creation of a river delta. Firstly, of course, there is the river itself. What kind of material does it transport to the delta? Does this material consist of small particles (clay) or larger particles (sand)? But other important factors include the extent of the tidal differences at the coast and the height of the waves whipped up by the wind. In this study, researchers at TU Delft are working together with Deltares and making use of the institute's computer models (Delft3D software). These models already take a large number of variables into account. Geleynse et al. have now supplemented them with information on the subsoil. It transpires that this variable also exerts a significant influence on how the river behaves and the closely related process of delta formation.
Room for the River
The extra dimension that Geleynse et al. have added to the model is important to delta management, among other things. If -- as the Delta Commission recommends -- we should be creating "Room for the River," it is important to know what a river will do with that space. Nathanaël Geleynse explains: "Existing data do not enable us to give ready-made answers to specific management questions ... nature is not so easily tamed ... but they do offer plausible explanations for the patterns and shapes we see on the surface. The flow system carries the signature of the subsoil, something we were relatively unaware of until now. Our model provides ample scope for further development and for studying various scenarios in the current structure."
Geological information
River management is all about short-term and possible future scenarios. But the model developed by Geleynse et al. also offers greater insight into how a river/delta has developed over thousands of years. What might the subsoil have looked like and -- a key factor for the oil industry -- where might you expect to find oil reserves and what might their geometrical characteristics be? In combination with data from a limited number of core samples and other local measurements, the model can give a more detailed picture of the area in question than was possible until now. The link between the creation of the delta and the structure of the delta subsoil is also of interest to engineers who wish to build there. Hundreds of millions of people across the globe live in deltas and these urban deltas are only expected to grow in the decades to come.
______________________________________________
Fonte: http://www.sciencedaily.com
Publicada por Bruno Silva à(s) 08:32