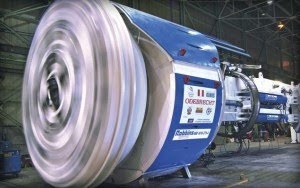 The Olmos Trans-Andean tunnel has been more than 100 years in the making, with several attempts made in the 1950’s using drill and blast techniques. The tunnel, more than 20 km (12 mi) long in total, will transfer water from the Huancabamba River on the Eastern side of the Andes to drought-ridden areas on the Pacific Ocean Watershed via a tunnel bored through the continental divide. The first phase also includes a 43 m (140 ft) high dam diverting the Huancabamba River near the village of San Felipe through the mountains to the dry Olmos River on the Pacific side. Once the first phase of the tunnel project is operational, the scheme will supply more than 2 billion cubic meters (500 billion gallons) of water annually for irrigation of 560 km2 (130,000 acres) of farmland. Phases to follow will include at least two more drill and blast tunnels, two hydroelectric stations generating 600 MW each, and a canal system to filter water throughout the coast.

The machine is boring in complex geology consisting of quartz porphyry, andesite, and tuff from 60 to 225 MPa (8,700 to 32,600 psi) UCS. Over 400 fault lines are present along the tunnel route, including two major fault lines approximately 50 m (160 ft) wide.

The overburden has created another problem — high in-tunnel temperatures exceeding 54 degrees Celsius (130 degrees Fahrenheit). To cope with the high temperature Robbins designed the machine with a unique ventilation and air cooling system. Two interacting systems are being used to cool the tunnel to 32 degrees Celsius (90 degrees Fahrenheit) or below. The high jobsite elevation (1,080 m / 3,500 ft) results in less dense air and less heat transfer capacity per cubic meter of air, so the two systems make it possible to blow more air into the tunnel for a maximum cooling effect.

Starting in late 2008, the TBM entered sections of high cover where crews experienced large overbreaks and cathedralling, along with over 10,000 recorded rock bursting events that could not be contained using wire mesh, rock bolts and ring beams. To better contain the fractured rock, Robbins and Odebrecht elected to make changes by installing a novel type of TBM ground support. The machine’s roof shield fingers were removed and replaced with the McNally Support System.

The McNally system works by replacing the curved finger shield plate for a curved assembly of pockets with rectangular cross-sections. The pockets extend axially from the rear side of the cutterhead to the cutterhead support, within the area where roof drills can work. Before a TBM stroke, crews slide slats of metal or wood into the pockets, such that the slats are two rows deep inside each pocket. The ends of the slats protrude from the pockets and are bolted to the roof of the tunnel using a steel strap. As the machine advances, the slats are extruded from the pockets and continuously bolted to the roof using subsequent straps. Slats are reloaded and used for the length of the tunnel to prevent deformation and rock falls.

Tunneling through the fractured and broken rock also created undue wear on the cutterhead. To cope with the problem, Robbins engineers added 19 mm (0.75 in) thick wear plates and 50 mm (2.0 in) thick square bars, known as ‘Boomerangs’, in front of each cutter. The boomerangs protect each cutter hub from blocky rock and bursting at the face.

Since modifications were done to the TBM, advance rates have steadily improved, with the machine boring as much as 674 m (2,211 ft) per month. The improved rates are all the more remarkable considering two hazardous local floods in April 2008 and March 2009, which both inundated the site with more than a meter of mud and wiped out access roads. By November 2009, the machine had advanced approximately 9,500 m (31,168 ft), or 68%, of the full tunnel length. All tunneling is expected to be complete by summer 2011.