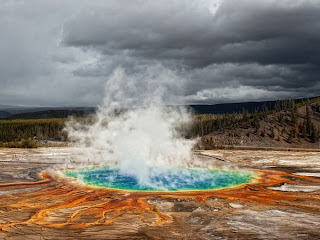 The giant plume of hot rock feeding the Yellowstone supervolcano may be even bigger than thought, scientists have discovered.

The volcanic plume had previously been imaged using seismic tomography. This method uses the speeds of seismic waves from distant earthquakes to map features of the crust and upper mantle in 3-D—similar to the way medical CT scans use x-rays to map the human body.

Earlier, seismic studies had shown that the magma chamber that fuels Yellowstone's geysers lies atop of a plume of unusually hot, and therefore soft, rock shaped like a tilted tornado.

Based on seismic data, the plume appears to slant downward at a 60-degree angle, extending about 150 miles (241 kilometers) west-northwest, toward the Montana-Idaho border.

The latest research is instead based on the plume's electrical conductivity. This data also shows a tilting plume, but the new study suggests the plume dips at a shallower, 40-degree angle and extends at least 400 miles (643 kilometers) westward.

Each technique also shows a different depth for the plume, although that discrepancy is due to the methods' differing capabilities. Electrical conductivity can "see" just 200 miles (322 kilometers) deep. But seismic readings can see as deep as 410 miles (660 kilometers)—and the previous data showed the plume extending that far.

"It's like in medical imaging, you can use ultrasound or you can use MRI," said study leader Michael Zhdanov, a geophysicist at the University of Utah in Salt Lake City. Both methods show different aspects of the same structures.

For the new study—accepted for publication in an upcoming issue of the journal Geophysical Research Letters—Zhdanov examined Yellowstone's plumbing with magnetotelluric imaging.

This technique uses dozens of monitoring stations to measure the intensity of ultralow-frequency electromagnetic waves generated in the ionosphere, an electrically charged layer of Earth's upper atmosphere.

These waves penetrate deep into Earth, all the way to the upper mantle, where they are affected by variations in the electrical conductivity of the materials they encounter.

Magnetotelluric imaging allowed Zhdanov's team to map not only the hot rock of the plume but also a shadowy zone surrounding it made of partially molten rock and areas impregnated with hot, salty water.

In addition to showing a larger plume, the new data reveal some intriguing details, said Kenneth Pierce, a geologist at the U.S. Geological Survey's Bozeman, Montana, office who was not part of the study team.

This region marks where heat rising from the leading edge of the plume is pushing rock up, as tectonic forces cause the plume to drift eastward.

The fact that both techniques show an overall similar shape to Yellowstone's plume is comforting, said Peter Cervelli, deputy scientist in charge of the Yellowstone Volcano Observatory, who was also not part of the study team.

"It's always reassuring when an entirely different methodology gives you a similar answer," Cervelli said. "It gives you reassurance that you're converging on the truth."

But he warns that it may be too early to properly interpret some of the details in the data, such as the hot spot swell.

"It is exciting [that] we are seeing details we haven't seen before," he said. "But I wouldn't make too much of [them] until they're corroborated by an independent data stream."

Study leader Zhdanov cautions against misconstruing a larger plume as proof that the Yellowstone supervolcano is on the verge of erupting.

The new findings instead bring scientists a step closer to understanding the magmatic plumbing that underlies Yellowstone and similar regions around the world, he said. Ultimately this data might help scientists determine which currently dormant volcanic regions are primed to erupt hundreds to thousands of years in the future.

In addition, Zhdanov said, the data "can help us build better geological models of the crust and upper mantle for mineral exploration and general understanding of geological structure."