The Boundary Between Magma and Water

Scientists and drillers recovered a remarkable suite of heat-tempered basalts that provide a detailed picture of the rarely seen boundary between magma and seawater. These samples were collected during a return to ODP Hole 1256D, one of the deepest “hard r

ock” penetration sites of scientific ocean drilling. ODP Hole 1256D has been stabilized, cleared to its full depth, and primed for further deepening. 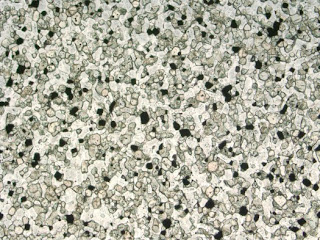 A granoblastic basalt (the hardest material ever drilled in ocean drilling) viewed under the microscope (picture is 2.3 mm across).

This expedition was the fourth in a series and builds on the efforts of three expeditions in 2002 and 2005.

Gabbros are coarse-grained intrusive rocks formed by the slow cooling of basaltic magmas. They make up the lower two-thirds of the ocean crust. The intrusion of gabbros at the mid-ocean ridges is the largest igneous process active on our planet with more than 12 cubic kilometers of new magma from the mantle intruded into the crust each year. The minerals, chemistry, and textures of gabbroic rocks preserve records of the processes that occur deep within the Earth’s mid-ocean ridges, where new ocean crust is formed.

“The formation of new crust is the first step in Earth's plate tectonic cycle,” explained Teagle. “This is the principal mechanism by which heat and material rise from within the Earth to the surface of the planet. And it’s the motion and interactions of Earth’s tectonic plates that drive the formation of mountains and volcanoes, the initiation of earthquakes, and the exchange of elements (such as carbon) between the Earth's interior, oceans, and atmosphere.”

“Understanding the mechanisms that construct new tectonic plates has been a major, long-standing goal of scientific ocean drilling,” added Ildefonse, “but progress has been inhibited by a dearth of appropriate samples because deep drilling (at depths greater than 1000 meters into the crust) in the rugged lavas and intrusive rocks of the ocean crust continues to pose significant technical challenges.”

ODP Hole 1256D lies in the eastern equatorial Pacific Ocean about 900 kilometers to the west of Costa Rica and 1150 kilometers east of the present day East Pacific Rise. This hole is in 15 million year old crust that formed during an episode of “superfast” spreading at the ancient East Pacific Rise, when the newly formed plates were moving apart by more than 200 millimeters per year (mm/yr).

“Although a spreading rate of 200 mm/yr is significantly faster than the fastest spreading rates on our planet today, superfast-spread crust was an attractive target,” stated Teagle, “because seismic experiments at active mid-ocean ridges indicated that gabbroic rocks should occur at much shallower depths than in crust formed at slower spreading rates. In 2005, we recovered gabbroic rocks at their predicted depth of approximately 1400 meters below the seafloor, vindicating the overall ‘Superfast’ strategy.”

Previous expeditions to Hole 1256D successfully drilled through the erupted lavas and thin (approximately one-meter-wide) intrusive “dikes” of the upper crust, reaching into the gabbroic rocks of the lower crust. The drilling efforts of Expedition 335 were focused just below the 1500-meter mark in the critical transition zone from dikes to gabbros, where magma at 1200°C exchanges heat with super-heated seawater circulating within cracks in the upper crust. This heat exchange occurs across a narrow thermal boundary that is perhaps only a few tens of meters thick.

In this zone, the intrusion of magma causes profound textural changes to the surrounding rocks, a process known as contact metamorphism. In the mid-ocean ridge environment this results in the formation of very fine-grained granular rocks, called granoblastic basalts, whose constituent minerals recrystallize at a microscopic scale and become welded together by magmatic heat. The resulting metamorphic rock is as hard as any formation encountered by ocean drilling and sometimes even tougher than the most resilient of hard formation drilling and coring bits.

Expedition 335 reentered Hole 1256D more than five years after the last expedition to this site. The expedition encountered and overcame a series of significant engineering challenges, each of which was unique, although difficulties were not unexpected when drilling in a deep, uncased, marine borehole into igneous rocks.

The patient, persistent efforts of the drilling crew successfully cleared a major obstruction at a depth of 920 that had initially prevented reentry into the hole to its full depth of 1507 meters. Then at the bottom of the hole the very hard granular rocks that had proved challenging during the previous Superfast expedition were once more encountered. Although there may only be a few tens of meters of these particularly tenacious granoblastic basalts, their extreme toughness once more proved challenging to sample– resulting in the grinding down of one of the hardest formation coring bits into a smooth stump.

A progressive, logical course of action was then undertaken to clear the bottom of the hole of metal debris from the failed coring bit and drilling cuttings. This effort required the innovative use of hole-clearing equipment such as large magnets, and involved over 240 kilometers of drilling pipe deployments (trips) down into the hole and back onto the ship. (The total amount of pipe “tripped” was roughly equivalent to the distance from Paris to the English coast, or from New York City to Philadelphia, or Tokyo to Niigata). These efforts returned hundreds of kilograms of rocks and drill cuttings, including large blocks (up to 5 kilograms) of the culprit granoblastic basalts that hitherto had only been very poorly recovered through coring. A limited number of gabbro boulders were also recovered, indicating that scientists are tantalizingly close to breaking through into the gabbroic layer.

Expedition 335 operations also succeeded in clearing Hole 1256D of drill cuttings, much of which appear to have been circulating in the hole since earlier expeditions.

“We recovered a remarkable sample suite of granoblastic basalts along with minor gabbros, providing a detailed picture of a rarely sampled, yet critical interval of the oceanic crust,” Ildefonse observed. “Most importantly,” he added, “the hole has been stabilized and cleared to its full depth, and is ready for deepening in the near future.”