Analysing the Bingham Canyon mine landslide part 2: the landslide track

The best overview image of the track of the landslide is this one (used with permission courtesy of the Kennecott Utah flickr site). 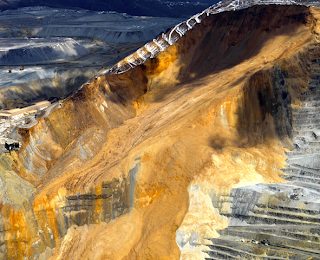 The first thing to note is that the block that failed does not extend to the floor of the mine – in fact it toes out about half way up the slope.  The landslide has run across the lower slope without inducing any major failure in this area.  So, on the lower slope it is still possible to see the remains of the mining benches, although they have been eroded from the passage of the landslide. 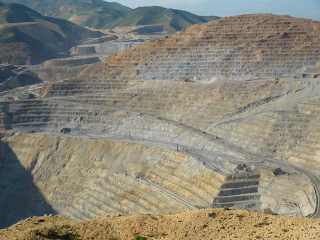 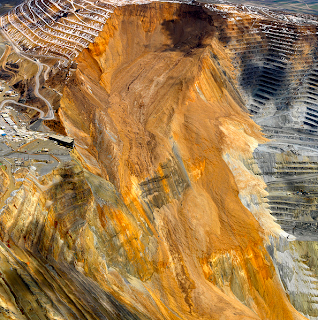 The unusual orientation of the shear surface is clear from the image below, also from Kennecott Utah.  The mine manager (see end of this post) explained that the failure occurred in a thin sedimentary band within the quartzites. 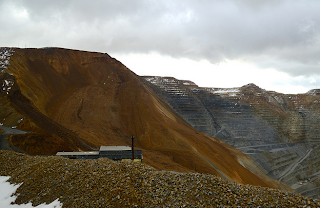 Note how the sliding surface, which is formed from an existing plane of weakness, is orientated towards the camera rather than into the pit.  This would have made release of the landslide much more kinematically difficult.  This might imply that the first landslide was a wedge failure in the lower part of the slide area, which then released the block moving on this comparatively unfavourable slide plane.  Analysis of the radar data would be very interesting in order to understand this.  Most of the debris followed a track that was defined by this basal sliding plane before in effect free-falling to the floor of the mine and spreading out. 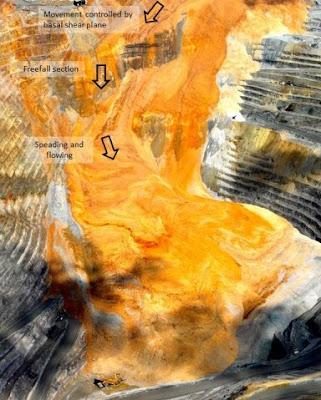 Another interesting aspect of this slide is the way that some material has flowed over the lateral boundary of the landslide. 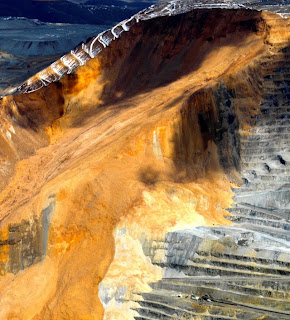 The obvious interpretation of this is that it is late movement of debris, but the images that show the slide surface well do not suggest that this is the case. 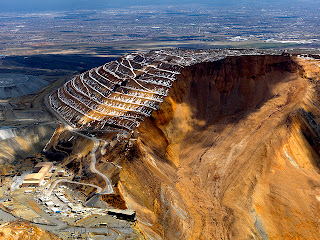 So it is likely that this is material that broke of the side of the main slide blocks during their movement and then followed the fall line.

Finally, Lee Allison from the Arizona Geological Survey has a video (but is private) interview with Ted Himebaugh, general manager of the mine about the landslide:

There are two really interesting points here:
1. He noted that the movement started about two and a half months ago.
2. They did not expect that the movement would extend to the pit bottom.  The latter is perhaps slightly surprising given that he says that they identified correctly the volume that was moving.

He correctly notes that the most important aspect of this was that the safety system performed perfectly.  This is a good demonstration that it is possible to manage even these very large pits very safely.