If the rifting process described occurs in a continental setting, then we have a situation similar to what is now occurring in Kenya where the East African/Gregory Rift is forming. In this case it is referred to as "continental rifting" (for obvious reasons) and provides a glimpse into what may have been the early development of the Ethiopian Rift. As mentioned in Part I, the rifting of East Africa is complicated by the fact that two branches have developed, one to the west which hosts the African Great Lakes (where the rift filled with water) and another nearly parallel rift about 600 kilometers to the east which nearly bisects Kenya north-to-south before entering Tanzania where it seems to die out .Lake Victoria sits between these two branches. It is thought that these rifts are generally following old sutures between ancient continental masses that collided billions of years ago to form the African craton and that the split around the Lake Victoria region occurred due to the presence of a small core of ancient metamorphic rock, the Tanzania craton, that was too hard for the rift to tear through. Because the rift could not go straight through this area, it instead diverged around it leading to the two branches that can be seen today. As is the case in Ethiopia, a hot spot seems to be situated under central Kenya, as evidenced by the elevated topographic dome there .This is almost exactly analogous to the rift Ethiopia, and in fact, some geologists have suggested that the Kenya dome is the same hotspot or plume that gave rise to the initial Ethiopian rifting. Whatever the cause, it is clear that we have two rifts that are separated enough to justify giving them different names, but near enough to suggest that they are genetically related.
Conclusions
The East African Rift System is a complicated system of rift segments which provide a modern analog to help us understand how continents break apart. It is also a great example of how many natural systems can be intertwined - this unique geological setting may have altered the local climate which may have in turn caused our ancestors to develop the skills necessary to walk upright, develop culture and ponder how such a rift came to be. Just like the Grand Canyon, the East African Rift System should be high on any geologist's list of geologic marvels to visit. 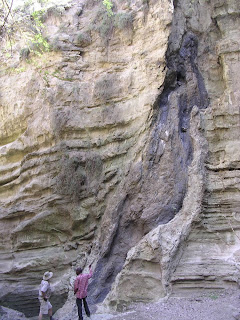 This was taken at the Njorowa Gorge in Hell's Gate National Park (Kenya). The gorge was carved by water, and is quite spectacular in many regards, but here we have an igneous dike cutting through the wall of the canyon, with Dr. Wood and one of our guides for scale. To enlarge (http://geology.com/articles/east-africa-rift/hells-gate-dike-750.jpg)
_________________________
Fonte:: Geology.com
Publicada por Bruno Silva à(s) 10:03