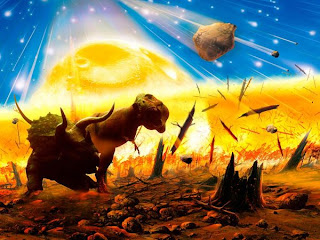 More than 90 percent of all organisms that have ever lived on Earth are extinct. As new species evolve to fit ever changing ecological niches, older species fade away. But the rate of extinction is far from constant. At least a handful of times in the last 500 million years, 50 to more than 90 percent of all species on Earth have disappeared in a geological blink of the eye.
Though these mass extinctions are deadly events, they open up the planet for new life-forms to emerge. Dinosaurs appeared after one of the biggest mass extinction events on Earth, the Permian-Triassic extinction about 250 million years ago. The most studied mass extinction, between the Cretaceous and Paleogene periods about 65 million years ago, killed off the dinosaurs and made room for mammals to rapidly diversify and evolve.
The causes of these mass extinction events are unsolved mysteries, though volcanic eruptions and the impacts of large asteroids or comets are prime suspects in many of the cases. Both would eject tons of debris into the atmosphere, darkening the skies for at least months on end. Starved of sunlight, plants and plant-eating creatures would quickly die. Space rocks and volcanoes could also unleash toxic and heat-trapping gases that—once the dust settled—enable runaway global warming.
An extraterrestrial impact is most closely linked to the Cretaceous extinction event. A huge crater off Mexico's Yucatán Peninsula is dated to about 65 million years ago, coinciding with the extinction. Global warming fueled by volcanic eruptions at the Deccan Flats in India may also have aggravated the event. Whatever the cause, dinosaurs, as well as about half of all species on the planet, went extinct.
Massive floods of lava erupting from the central Atlantic magmatic province about 200 million years ago may explain the Triassic-Jurassic extinction. About 20 percent of all marine families went extinct, as well as most mammal-like creatures, many large amphibians, and all non-dinosaur archosaurs. An asteroid impact is another possible cause of the extinction, though a telltale crater has yet to be found.
Largest Ever Die-Off
The Permian-Triassic extinction event about 250 million years ago was the deadliest: More than 90 percent of all species perished. Many scientists believe an asteroid or comet triggered the massive die-off, but, again, no crater has been found. Another strong contender is flood volcanism from the Siberian Traps, a large igneous province in Russia. Impact-triggered volcanism is yet another possibility.
Starting about 360 million years ago, a drawn-out event eliminated about 70 percent of all marine species from Earth over a span of perhaps 20 million years. Pulses, each lasting 100,000 to 300,000 years, are noted within the larger late Devonian extinction. Insects, plants, and the first proto-amphibians were on land by then, though the extinctions dealt landlubbers a severe setback.
The Ordovician-Silurian extinction, about 440 million years ago, involved massive glaciations that locked up much of the world's water as ice and caused sea levels to drop precipitously. The event took its hardest toll on marine organisms such as shelled brachiopods, eel-like conodonts, and the trilobites.
Happening Now?
Today, many scientists think the evidence indicates a sixth mass extinction is under way. The blame for this one, perhaps the fastest in Earth's history, falls firmly on the shoulders of humans. By the year 2100, human activities such as pollution, land clearing, and overfishing may have driven more than half of the world's marine and land species to extinction.
Fonte: http://science.nationalgeographic.com
Publicada por Laura Murtinha à(s) 20:13