New Theory about Formation of the Oldest Continents

The Earth's structure can be compared to an orange, that is, its crust is the peel supported by the earth's heavy mantle. That peel is made up of a continental crust with 30 to 40 kilometers thick, it is much lighter than the thinner oceanic crust and protrudes from the Earth's mantle because of its lower density, like an iceberg in the sea. 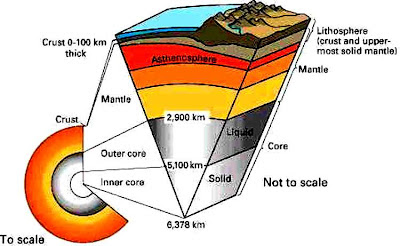 "According to the current theory, the first continental crusts were formed when tectonic plates would collide, submerging oceanic crusts into the Earth's mantle, where they would partially melt at a depth of approximately 100 kilometers. That molten rock then ascended to the Earth's surface and formed the first continents," says adjunct professor Dr. Thorsten Nagel of the Steinmann Institute of Geosciences at the University of Bonn, lead author of the study. The theory has been supported by the oldest known continental rocks, approximately 3.8 billion years old, found in western Greenland. 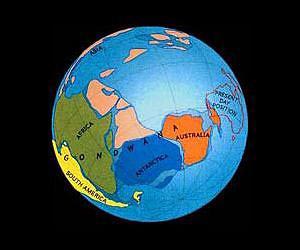 crust melted by 10 to 30 percent of its original state. Unfortunately, the concentrations of the main chemical components in the re-solidified rock do not provide much information about what depth the fusion occurred at.

Prof. Dr. Carsten Munker of the Institute of Geology and Mineralogy at the University of Cologne explains, "In order to find that out, you have to know what minerals the remaining 70 to 90 percent of the oceanic crust consisted of". Researchers from Bonn and Cologne have now analyzed the Greenlandic rocks for different elements occurring at various high concentrations, also know as trace elements.

"Trace elements provide geologists with a window to the origin of continental crust," says Prof. Munker. "With their help, we can identify minerals in the residual rock that were deposited in the depths by the molten rock." Before the magma separated from the bedrock, the semifluid rock and the leftover solid minerals actively exchanged trace elements.

Dr. Elis Hoffmann from Bonn, coauthor of the study, explains, "Different minerals have characteristic ways of separating when trace elements are smelted. In other words, the concentration of trace elements in the molten rock provide a fingerprint of the residual bedrock". The concentration of trace elements in the oldest continental rock allows geoscientists to reconstruct possible bedrock based on their minerals and thus determine at what depth the continental crust originated.

The oceanic crust did not have to descend

Using computers, the scientists simulated the composition of bedrock and molten rock that would emerge from partially melting the oceanic crust at various depths and temperatures.

They then compared the data calculated for the molten rock with the actual concentration of trace elements in the oldest continental rocks. "Our results paint a surprising picture," Dr. Nagel reports. "The oceanic crust did not have to descend to a depth of 100 kilometers to create the molten rock that makes up the rocks of the first continents." According to the calculations, a depth of 30 to 40 kilometers is much more probable.

The primeval oceanic crust could have "oozed" continents

...it could definitely have had the power to do so in the Archean Eon. Four billion years ago, the gradually cooling earth was still significantly warmer than it is today. The oceanic crust could have simply "oozed" continents at the same time that other geological processes were occurring, like volcanism, orogeny, and the influx of water.

The geologist from Bonn says, "We think it is unlikely that the contents were formed into subduction zones. Whether or not tectonic plates of the primordial earth had such zones of subsidence is still a matter of debate".