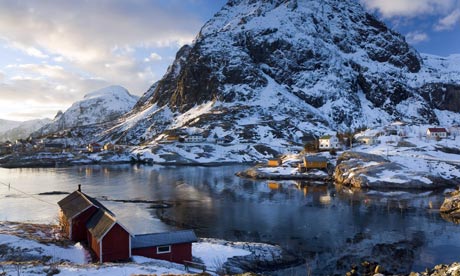 Bay and mountain at sunset at Tind, one of Lofoten Islands in Norway
Photograph: Peter Adams/Peter Adams

Perched 200km north of the Arctic Circle, the Lofoten islands in Norway paint a picture-perfect image of serenity. High mountains plunge into the sea, villages of brightly painted wooden houses nestle on the shores of sheltered bays, while fishing boats pull gently on their anchors. But underneath the surface, the Lofoten islands are the latest battleground for the right to exploit the polar region's oil and gas resources, with local fishermen and environmentalists hoping to defeat a multi­billion pound industry.

As Norway's oil reserves in the North Sea are emptying – the country is the world's fifth largest oil exporter – it is now looking to the Arctic north in search of new oil riches. And the Lofoten islands appear promising. Between May and September, Norway's state oil agency will be mapping the seabed outside the archipelago in search of hydrocarbon deposits, as it already did in 2008.

"We expect the area to hold 20% of all remaining undiscovered reserves on the Norwegian continental shelf," explained Odd-Ragnar Lorentsen from the Norwegian Petroleum Directorate (NPD).

This view is shared by the oil companies, which are not currently allowed to explore in the region. "There is a potential for oil and gas off the Lofoten," said Oerjan Birkeland, exploration manager for the Norwegian oil company StatoilHydro. "We would like the region to be opened [for drilling]. We must have the ability to explore."

But not everyone is welcoming a potential oil boom in the region. The fishing industry, which has dominated the economy of the region for the past millennium, fears oil activity could endanger the Barents Sea cod, the largest cod stock in the Atlantic Ocean, which spawns off the coast of Lofoten in February-March and is a highly profitable fisheries.

"I am absolutely against searching for oil and gas in the Lofoten area," said a visibly angry Rolf Arne Jacobsen, a 52-year-old fisherman, in the port of Svolvær. "It would be a catastrophic development that would endanger both the fisheries and nature."

Surveying has already been killing off fish stocks. To map the seabed, scientists shoot out an air pulse at high pressure that rebounds on the seabed, killing any small fish within a 10-metre radius. "The dead fish float on the surface after the surveying ships have done their research," claimed Jacobsen. And it is not known what effects the surveying has on the surviving fish. In some regions, 2008's catches of hake are a tenth of what they were on 2007's – and the fishermen blame the seismic surveys.

The tourism industry is also up in arms, as Lofoten is one of Norway's top tourist destinations, with travellers flocking to admire its flora and fauna. "Lofoten would be a less attractive destination," said Heike Vester, who runs marine safaris from the port of Henningsvær.
Vester is afraid that oil installations, such as offshore platforms, pipelines and other on-land installations would damage the pristine nature and kill her business. "When I tell my customers what's going on, they tell me they don't want to come back," she said.

Environmentalists also have huge concerns for the fragile Arctic environment. "There are even more storms here than in the North Sea, and during the winter there is only daylight for three to four hours per day [making cleaning operations more difficult]," said Maren Esmark, head of conservation at WWF-Norway. "An oil spill would have more dramatic consequences, especially since the areas that are being surveyed are very near the coast."

However, not everyone is opposed to the idea. "We just can't live off tourism and service jobs, we need other types of jobs too," said Brita Malnes, who owns a cornershop in Henningsvær. "If oil and gas mean we could get jobs, then it would be good. But at the same time it should not destroy the nature around here."

Public information meetings for Lofoten's 23,500 inhabitants last year have been tumultuous. "In 30 years of working in the oil industry I have never seen such reactions," said Lorentsen. "At one meeting, a grandmother was in tears because she thought we were going to put her grandson, a fisherman, out of work… People are scared and we should understand that."

Part of Lorentsen's surprise is that this is a country that has grown fabulously wealthy on the oil industry. Thanks to the North Sea's resources, Norway boasts one of the world's largest GDP per capita (about $55,669 or £38,242 in 2008, compared with the UK's $35,070).

But it is precisely the North Sea's declining reserves that are driving the search for oil in the north. Oil production peaked in 2001, and "by 2023, it will have reduced by 50%," said Birkeland. "The way forward is to increase recovery from existing fields and increase exploration."

Already one gas field, Snow White, is being exploited in the Norwegian side of the Barents Sea, with oil companies discovering new fields every year.

StatoilHydro alone has drilled 21 wells and made 14 discoveries. "We made two finds just in 2008," said Birkeland.

Another company, the Italian oil group ENI, is hoping to get the right to exploit the Goliat oil field in the Barents Sea.

Politicians are divided about the way forward. In the cabinet coalition, the Socialist Left party is opposed to oil exploration around Lofoten, while the dominant partner, Labour, is broadly in favour. Similarly, in opposition, the Christian Democrats and the Liberals oppose it while the Conservatives are in favour. Oil exploration in the Lofoten is already set to be one of the top issues of September's general election.