The Sliding Rocks of Death Valley 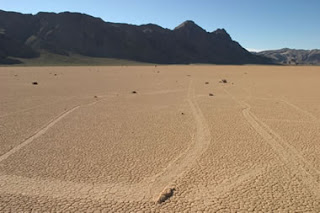 One of the most interesting mysteries of Death Valley National Park is the sliding rocks at Racetrack Playa (a playa is a dry lake bed). These rocks can be found on the floor of the playa with long trails behind them. Somehow these rocks slide across the playa, cutting a furrow in the sediment as they move.

Some of these rocks weigh several hundred pounds. That makes the question: "How do they move?" a very challenging one.
The truth: No one knows for sure exactly how these rocks move - although a few people have come up with some pretty good explanations. The reason why their movement remains a mystery: No one has ever seen them in motion!

Let's learn how they are thought to move....
About Racetrack Playa

Racetrack playa is lake bed that is almost perfectly flat and almost always dry. It is about 4 kilometers long (2.5 miles - north to south) and about 2 kilometers wide (1.25 miles - east to west). The surface is covered with mudcracks and the sediment is made up mainly of silt and clay.
The climate in this area is arid. It rains just a couple of inches per year. However, when it rains, the steep mountains which surround Racetrack Playa produce a large amount of runoff that converts the playa floor into a broad shallow lake. When wet, the surface of the playa is transformed into a very soft and very slippery mud. 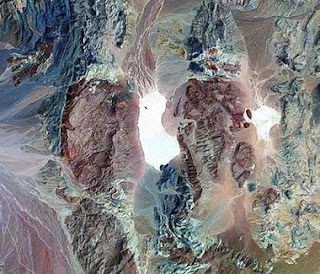 Landsat image of Racetrack Playa. It is the flat white area in the center of the image. 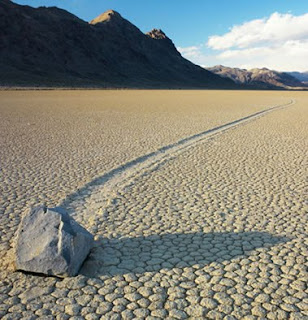 Are They Moved by People or Animals?

The shape of trails behind the rocks suggest that they move during times when the floor of Racetrack Playa is covered with a very soft mud. A lack of disturbed mud around the rock trails eliminates the possibility of a human or animal pushing or assisting the motion of the rocks.

Are They Moved by Wind?

This is the favorite explanation. The prevailing winds that blow across Racetrack Playa travel from southwest to northeast. Most of the rock trails are parallel to this direction. This is strong evidence that wind is the prime mover or at least involved with the motion of the rocks.

Strong wind gusts are thought to nudge the rocks into motion. Once the rock begins to move a wind of much lower velocity can keep the rock in motion as it slides across the soft and very slippery mud. Curves in the rock trails are explained by shifts in wind direction or in how the wind interacts with an irregularly shaped rock.

Are They Moved by Ice?

A few people have reported seeing Racetrack Playa covered by a thin layer of ice. One idea is that water freezes around the rocks and then wind, blowing across the top of the ice, drags the ice sheet with its embedded rocks across the surface of the playa.

Some researchers have found highly congruent trails on multiple rocks that strongly support this movement theory. However, the transport of a large ice sheet might be expected to mark the playa surface in other ways - these marks have not been found.

Other researchers experimented with stakes that would be disturbed by ice sheets. The rocks moved without disturbing the stakes. The evidence for ice-sheet transport is not consistent.

Wind is the Favored Mover

All of the best explanations involve wind as the energy source behind the movement of the rocks. The question remains is do they slide while encased in an ice sheet or do they simply side over the surface of the mud? Perhaps each of these methods is responsible for some rock movement?