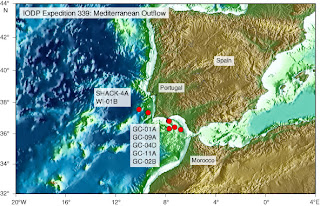 Mediterranean bottom currents and the sediment deposits they leave behind offer new insights into global climate change, the opening and closing of ocean circulation gateways and locations where hydrocarbon deposits may lie buried under the sea.

A team of 35 scientists from 14 countries recently returned from an expedition off the southwest coast of Iberia and the nearby Gulf of Cadiz. There the geologists collected core samples of sediments that contain a detailed record of the Mediterranean's history. The scientists retrieved the samples by drilling into the ocean floor during an eight-week scientific expedition onboard the ship JOIDES Resolution.

The group--researchers participating in Integrated Ocean Drilling Program (IODP) Expedition 339: Mediterranean Outflow--is the first to retrieve sediment samples from deep below the seafloor in this region.

Much of the sediment in the cores is known as "contourite" because the currents that deposit it closely follow the contours of the ocean basin.

"The recovery of nearly four kilometers of contourite sediments deposited from deep underwater currents presents a superb opportunity to understand water flow from the Mediterranean Sea to the Atlantic Ocean," says Jamie Allan, program director at the National Science Foundation (NSF), which co-funds IODP. "Knowledge of this water flow is important for understanding Earth's climate history in the last five million years."

"We now have a much greater insight into the distinctive character of contourites, and have validated beyond doubt the existing paradigm for this type of sedimentation," says Dorrik Stow of Heriot-Watt University in the United Kingdom and co-chief scientist for Expedition 339.

The world's oceans are far from static. Large currents flow at various depths beneath the surface. These currents form a global conveyor belt that transfers heat energy and helps buffer Earth's climate. Critical gateways in the oceans affect circulation of these major currents. The Strait of Gibraltar is one such gateway. It re-opened less than six million years ago.

Today, deep below the surface, there is a powerful cascade of Mediterranean water spilling out through the strait into the Atlantic Ocean. Because this water is saltier than the Atlantic--and therefore heavier--it plunges more than 1,000 meters downslope, scouring the rocky seafloor, carving deep-sea canyons and building up mountains of mud on a little-known submarine landscape.

The sediments hold a record of climate change and tectonic activity that spans much of the past 5.3 million years. The team found evidence for a "tectonic pulse" at the junction between the African and European tectonic plates, which is responsible for the rising and falling of key structures in and around the gateway. This event also led to strong earthquakes and tsunamis that dumped large flows of debris and sand into the deep sea.

At four of the seven drill sites, there was also a major chunk of the geologic record missing from the sediment cores--evidence of a strong current that scoured the seafloor. "We set out to understand how the Strait of Gibraltar acted first as a barrier and then a gateway over the past six million years," says Javier Hernandez-Molina of the University of Vigo in Spain and co-chief scientist for Expedition 339. "We now have that understanding and a record of a deep, powerful Mediterranean outflow through the Gibraltar gateway."

The first drill site, located on the west Portuguese margin, provided the most complete marine sediment record of climate change over the past 1.5 million years of Earth history. The sediment cores cover at least four major ice ages and contain a new marine archive to compare against ice core records from Greenland and Antarctica, among other land-based records. The team was surprised to find exactly the same climate signal in the mountains of contourite mud they drilled in the Gulf of Cádiz. Because these muds were deposited much faster than the sediments at the Portuguese margin site, the record from these cores could prove to yield even richer, more detailed climate information.

"Cracking the climate code will be more difficult for contourites because they receive a mixed assortment of sediment from varying sources," Hernandez-Molina says. "But the potential story that unfolds may be even more significant. The oceans and climate are inextricably linked. It seems there is an irrepressible signal of this nexus in contourite sediments." The team also found more sand among the contourite sediments than expected. The scientists found this sand filling the contourite channels, deposited as thick layers within mountains of mud, and in a single, vast sand sheet that spreads out nearly 100 kilometers from the Gibraltar gateway. All testify to the strength, velocity and duration of the Mediterranean bottom currents. The finding could affect future oil and gas exploration, the researchers believe.

"The thickness, extent and properties of these sands make them an ideal target in places where they are buried deeply enough to allow for the trapping of hydrocarbons," Stow explains.

The sands are deposited in a different manner in channels and terraces cut by bottom currents; in contrast, typical reservoirs form in sediments deposited by downslope "turbidity" currents.

"The sand is especially clean and well-sorted, and therefore very porous and permeable," says Stow. "Our findings could herald a significant shift in future exploration targets."

IODP is an international research program dedicated to advancing scientific understanding of the Earth through drilling, coring, and monitoring the subseafloor. IODP is supported by two lead agencies: the U.S. National Science Foundation and Japan's Ministry of Education, Culture, Sports, Science, and Technology. Additional program support comes from the European Consortium for Ocean Research Drilling, the Australia-New Zealand IODP Consortium, India's Ministry of Earth Sciences, the People's Republic of China (Ministry of Science and Technology), and the Korea Institute of Geoscience and Mineral Resources.